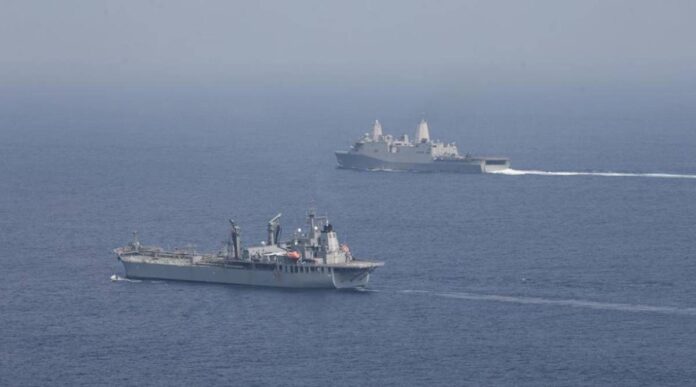 India on Friday said it had conveyed its concerns to the US through diplomatic channels after the US Navy’s 7th Fleet announced it conducted Freedom of Navigation Operations within India’s exclusive economic zone or EEZ off the Lakshadweep Islands without India’s permission. This is in dissonance with India’s maritime security policy of such exercises requiring its authorisation.

“The Government of India’s stated position on the United Nations Convention on the Law of the Sea is that the Convention does not authorise other States to carry out in the Exclusive Economic Zone and on the continental shelf, military exercises or manoeuvres, in particular those involving the use of weapons or explosives, without the consent of the coastal state,” the Ministry of External Affairs said in a statement.

“The USS John Paul Jones was continuously monitored transiting from the Persian Gulf towards the Malacca Straits. We have conveyed our concerns regarding this passage through our EEZ to the Government of USA through diplomatic channels,” it added.

A statement by the US 7th Fleet Public Affairs had earlier said, “On April 7, 2021 (local time), the USS John Paul Jones asserted navigational rights and freedoms approximately 130 nautical miles west of the Lakshadweep Islands, inside India’s exclusive economic zone, without requesting India’s prior consent, consistent with international law. India requires prior consent for military exercises or manoeuvres in its exclusive economic zone or continental shelf, a claim inconsistent with international law.

The statement would be jarring for New Delhi since the US is among India’s closest strategic partners with both sides having repeatedly opposed China’s maritime expansionism, particularly in the South China Sea. India and the US hold Naval exercises throughout the year.

In response to a query from NDTV on whether the Indian Navy attempted to contact the US Navy ship involved in the operation, a US Navy Spokesperson said, “All interactions during the freedom of navigation operation were in accordance with international law.”

Their statement further said: “We conduct routine and regular Freedom of Navigation Operations (FONOPs), as we have done in the past and will continue to in the future. FONOPs are not about one country, nor are they about making political statements.”

In the Quad group meeting held in February this year, the first since a new US administration took over, the partners pledged “to strengthen cooperation on advancing a free and open Indo-Pacific region, including support for freedom of navigation and territorial integrity”.

The Quad grouping consists of the US, India, Japan, and Australia, and is viewed as a buffer against an increasingly assertive Beijing.

No access to welfare, free healthcare: Refugees in India among the worst hit by Covid-19