Amnesty International has called on the Sri Lankan Government to conduct a full investigation into the violence against journalists and bring the perpetrators to justice.

On the eve of International Press Freedom Day, Amnesty International’s post on Sri Lanka’s official Twitter page Saying, the government should ensure the freedom of expression of the people, especially the media, by ensuring a safe environment for those working in the media so that they can publish or speak real news or information without any fear or loss. 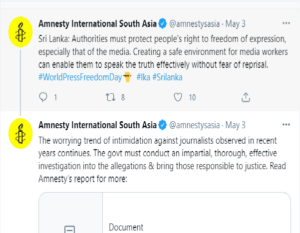