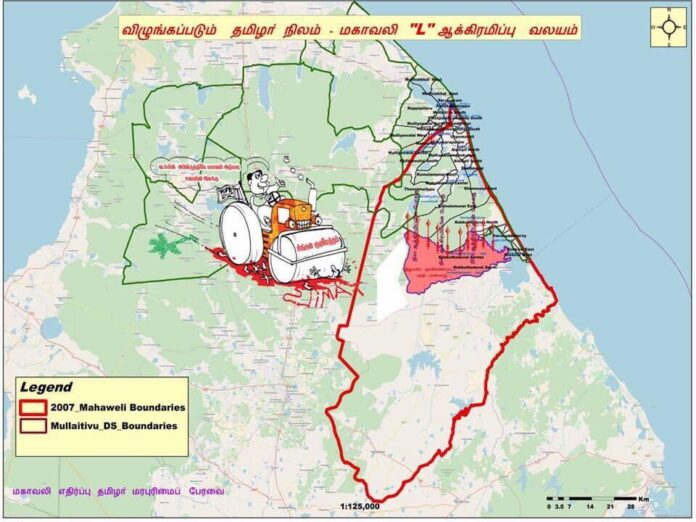 Saba Guhadas, Leader of Tamil Eelam Liberation Organization, has said, The Governor of the Northern Province should not agree to the attempt of the Central Government to take over the land belonging to Tamils in the name of Mahaweli L Zone in the Mullaitheevu District.

The Mahaweli L Zone is a planned genocide, as the Tamil people continue to struggle to stop the chauvinist government’s agenda of subjugating Tamil-dominated areas to Sinhala settlements and breaking the Tamil homeland ideology.
As the first step of a big plan of usurping the Mullaitheevu which is the heartland of Tamils, changing the Tamil names of the places into Sinhalese. This process started with Manalarau changed to Welioya Sinhala settlement, continued with aiming in the big landscape which has more than 16 village officers section such as Thenmaravadi, Kokkulai, Kokkuthoduvaai, Karunattukeni, Semmalai thanneer ootru.
Tamils ​​living in the area have been displaced by the war since 1984 and have been living as refugees until 2010. They are currently living in extreme poverty without adequate assistance.
75000 young men and women in the Northern Province are experiencing great misery without employment. The Governor of the Northern Province should put forward plans to the Government to assist the welfare of the younger generation so that the problem of employment can be solved by providing land for their self-employment venture as well as improving the subsistence economy.
Using this issue, the Governor of the Northern Province should provide the land for the Tamil entrepreneur who applied for land for their new startups. The administration of the Governor of the Northern Province should not cooperate with the unjust settlement scheme and must act fairly to protect the existence of Tamils.