At his first press conference held by US President Joe Biden on March 25, 2021, he called on democracies to unite against individual states. The countries under a single monarchy are striving to become the world’s leading, richest and most powerful nations.

“I will not allow that to happen until I am in office,” Biden said. U.S. policymakers believe China’s economic development, technological development and military build-up must be suppressed.

Representatives of the United States and China met face-to-face on March 19 and 20, 2021 in Alaska, the North Pole of the United States. The talks were held with the aim of easing the trade war between the two countries and the talks did not go smoothly. After the talk, they exchanged words.

The Chinese military was originally created to have the largest number of troops in the world. China later became the country with the largest number of submarines, with a greater focus on submarines to counter the massive US Navy. Later the navy was upgraded to have the largest fleet in the world in terms of numbers. Nevertheless, the United States continues to technologically improve its naval strength. The United States has ten aircraft carriers. They also include fifth-generation fighter jets. 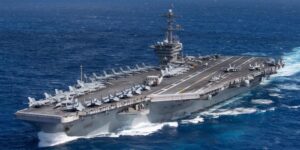 China’s two aircraft carriers are the most backward in terms of attack. China does not have the wreckage that can protect an aircraft carrier. Thus China focused on its missile production and developed hypersonic missiles that could fly at twenty times the speed of sound. These could not be intercepted and destroyed by US anti-missile systems. Some military analysts have suggested that US aircraft carriers may have been wrecked. The United States has developed laser weapons that can easily and cheaply intercept and destroy China’s hypersonic missiles.

Is China or the United States stronger?

Taiwan’s position will answer the question of whether China or the United States is strong in the military. It can be said that China surpassed the United States on the day when China annexed Taiwan. The capture of Taiwan will benefit China in two ways. One is that China can get the technological development of Taiwan. If China captures Taiwan, which has the second fifteen deep-sea ports, its naval strength will be much higher. China will become a threat to the United States in the Pacific. The United States has accused China of infiltrating US technology and stealing its warplanes. 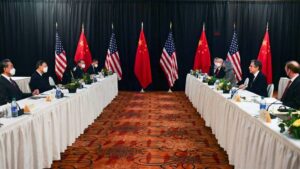 Although China produces many aircraft, it has not yet developed aircraft engines. Copying machine production technology is very difficult. So the Chinese Air Force is less powerful than the US Air Force. If the US-China war breaks out in the region around China, both countries will suffer huge losses first. The US loss will be high. But China will suffer massive losses as US troops move into China from different parts of the world. Countries like Japan, South Korea, Australia, India and Vietnam will go to war against China because defeating the United States is a threat to their security. Then China will be defeated. This will be the case for the next ten years. Meanwhile, in the next ten years, a military alliance against China will be formed with the United States, Japan, South Korea, Vietnam, Australia, India, Thailand and Indonesia. Then China will have to surrender.

China’s one-child-per-family policy is now having a massive impact on its population structure. The number of elderly people in China’s population is increasing and the number of young people is declining. This is going to have a massive economic impact. Not only that, but there may be a shortage of personnel in the army. Thus China can automatically shrink.

Pics: US Navy and AFP