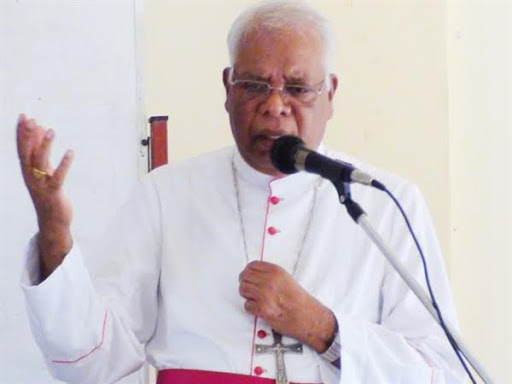 He was more than a Bishop. A human rights crusader to the core and a saviour of Tamil people, and above all a down to earth human being.

This holy man – a key witness to Sri Lanka’s alleged war crimes – who shocked the world by exposing the horrific human cost of the bloodbath in the final stages of the civil war, passed away on Thursday (01) at a private hospital in Jaffna.

Rt.Rev Rayappu Joseph former Bishop of Mannar was unique in many ways, he loved his people and land more than any of his fellow clergymen in Sri Lanka.

Many areas coming under the Mannar diocese suffered extensively during the war and churches which served as refuge centres were attacked, people were killed, maimed and went missing. Some of the Catholic clergy were killed or victims of the brutal regime which waged the relentless war. Thousands were forced to flee from their homes to escape the shelling.

Even the idol of Our Lady of Madhu venerated for centuries had to be take away from the shrine for safekeeping.

‘It’s my duty a to save my people, save their lands more than anything else. I have an obligation to save the divine idol of the Virgin Mary, who is adored by hundreds of thousands the faithful, I fear for her safety too, that’s why I am forced to relocate her to the Thevanpitty church where she will be safe among her people” he told me when I interviewed him for the BBC Tamil Service on the day when the Sri Lankan Army shelled the Madhu Church killing at least 40 refugees.

Serving Tamil war victims for two and a half decades, the outspoken priest was constantly harassed by the security forces as well as Sinhala politicians and the press for providing credible evidence of alleged war crimes and crimes against humanity – especially that nearly 150,000 civilians have gone missing in less than a year.

A week before the government declaring the end of war in May 2009, the United Nations has described the situation in northern Sri Lanka as a “bloodbath” after the killing of more than 100 children in an area where tens of thousands were trapped. 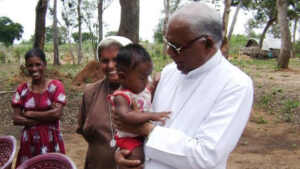 However, with no presence of international agencies or media in the government designated ‘No Fire Zone’ the world at large was oblivious to the ongoing atrocity.

Rt.Rev. Rayappu Joseph was an excellent communicator and a vital and unbiased source of authentic information to the media. He had access to information from all quarters and was an outspoken critic and hence called controversial.

“I am called a controversial Bishop because there are ‘controversial’ issues taking place. When I raise my voice against it, I am labelled as ‘controversial’. If I speak up for my people, I am called ‘outspoken’. When I care for the Tamil people and stand with them, I am hounded as ‘anti-national’ and an LTTE supporter and a separatist. I don’t care about such accusations. I will continue to raise my voice against injustice to people and continue to fight human rights violations” he told me in yet another interview.

Almost two years after the brutal civil war was brought to a bloody end, the late Mannar Bishop presented shocking details to a government body revealing that almost 150,000 civilians who used to live in the war zone have gone unaccounted for after the area came under military control.

Hundreds of thousands of Tamils who were displaced from their land were moved to the sprawling Menik Farm camp in heavily militarized Vavunia. Tens of thousands surrendered to security forces.

“Due clarification should be made regarding what happened to 146,679 people, which is the discrepancy between the number of people who came to government-controlled areas between October 2008 – May 2009 and the population reported to be in Vanni in early October 2008,” Bishop Rayappu Joseph told the Lessons Learnt and Reconciliation Commission (LLRC) in 2011.

His submission was based on facts. Yes-data from the government statistics itself- which can’t be refuted.

“Based on information from the Kacheris (district secretariats) of Mullativu and Killinochi about the population in Vanni in early October 2008 and number of people who came to government-controlled areas after that, 146,679 people seem to be unaccounted for. According to the Kacheri, the population in Vanni was 429,059 in early part of October 2008 (Refer Annex 4 and 5). According to UN OCHA (Office for the Coordination of Humanitarian Affairs) update as of 10th July 2009, the total number of people who came out of the Vanni to government-controlled areas after this is estimated to be 282,380.”

“Even before his exposure locally, the Bishop was instrumental in providing evidence to the Dublin Session of the Peoples Tribunal on Sri Lanka,” recalled the co-coordinator of the Tribunal, Dr. Jude Lal Fernando, Assistant Professor in the Trinity College of Dublin.

The outspoken priest was vilified by the government and Sinhala nationalists including some rights activists as “Tiger Bishop,” to which he was impervious to. He was loved by Tamils as the “Peoples Bishop”.

“He did not worry about the Tamil Tiger label attached to him by the Sinhala chauvinists, including those in the Sinhala Catholic Church,” Dr. Jude Lal Fernando told JDS.

“He was compassionate and fearless. Totally side-lined by the Sinhala Catholic hierarchy in Colombo he did not waver, but went on standing with the people who have been tormented for decades. Whenever I met him back in the 90s and early 2000, he did not speak about church matters at all, but about the people”.

Rich tributes are flowing in for the ‘people’s bishop’ from the Tamil Community and its leaders. TNA leader and Sampanthan said, “He was for the people and with the people who stood with them in thick and thin and left an indelible mark. His contribution to humanity was beyond race and religion.”

Tamil Lawmaker and leader of the Tamil National People’s Front Gajendrakumar Ponnambalam in his message on facebook, “He was the voice of the underprivileged and those oppressed. He documented facts and presented irrefutable evidence to the international community and organisations.

The death of the human rights champion has exposed the deep divide in the society yet again. While the Tamils and the clergy in the North and East mourn the demise of Rt. Rev. Rayappu Joseph, the South of the country has maintained a stony silence.

Even as a matter of courtesy neither the President or the Prime Minister has expressed their condolences. And, Sinhala politicians have followed suit.

“In a land where religious leadership is synonymous with religious bigotry, Bishop Rayappu Joseph leaves behind an important legacy with us. That legacy challenges the role of religious leaders in a country that has witnessed waves of state-led mass atrocities,” said Dr Jude Lal Fernando.

Bishop Rayappu Joseph’s death marks the loss of a key witness to war crimes. Sri Lanka that vehemently denies that its military committed any crimes. Now its president, the wartime defence secretary has appointed another commission to read whether earlier investigations found any wrongdoings.

The ‘Peoples Bishop’ had to leave without knowing the fate of almost 150,000 even though he had submitted credible evidence to such ‘domestic mechanisms’ a decade ago.