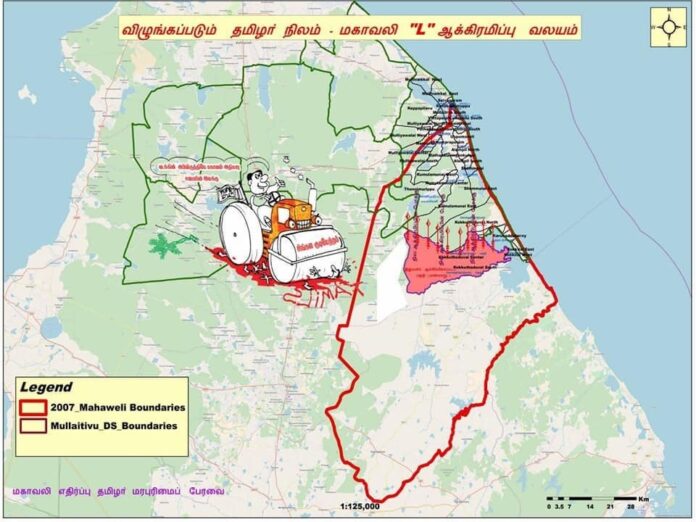 The people of Mullaitivu district are shocked that more than 10 thousand acres of their land are in danger of being grabbed.

The Mahaweli Authority has personally requested the Governor of the Northern Province to arrange for the 13 Grama Sevaka Divisions of the Karaithuraipatru Divisional Secretariat of the Mullaitheevu District to function under them.

In 2018, during the tenure of the then President, Maithripala Sirisena who was also Minister of Mahaweli Development, It was published in Gazzetta that the project’s boundary was from present Welioya to Mulliyawalai, Kokkulai Kokkuthotuvai, Thanneeruttru and the area adjacent to the District Secretariat.

Officials at the Mahaweli Authority pointed out to President Gotabhaya Rajapaksa, who recently visited Bopaswewa, that though it has been published in State Gazette there are many barriers in functioning and implementation under the authority. The President had instructed the Governor to make arrangements for the presence of the State Magazine.

On Wednesday, the monks in the Mullaitivu along with the local councilors, the district officials of the Mahaweli Authority visited the Governor’s Secretariat last Wednesday, showed the relevant documents and maps to the Governor, explained the boundaries of their authority and its permission, and sought permission to proceed with it.

The governor, who investigated the demands, said that, as it was told by President Mahaweli authority can proceed on a condition that no outsiders are given land there.

Residents of the villages said they were shocked to learn that the Northern Province Governor’s Office had issued a written notification agreeing to hand over their lands to the Mahaweli Authority.

In recent times, attempts have been made to merge the 6 Grama Sevakar sections of the Tamil people in the Mahaweli L Zone. As soon as the information about this was released, all the parliamentarians in the Tamil national area had signed and handed over a letter to the Minister in charge of Mahaweli, Samal Rajapaksa. As such, the project has been suspended and is currently being re-initiated through the Governor of the North.

Tamil political parties and intellectuals opposed the plan, saying it was a political agenda to permanently weaken the Tamil homeland demand, in the context of the amalgamation of six Tamil Grama Sevakar areas into the Mahaweli L Zone, which is part of the confluence of the north-eastern Tamil homeland from Kokkulai seawater to Nay Aru river.

Among these, Tamil Grama Niladhari divisions are the disputed Kokkulai Vihara, the Niraviyadi Pillaiyar Temple where the Tamil people continue to fight for their traditional rights, against massive military camps within the area. It is noteworthy that the Tamil political parties have already pointed out that the Neeraviyadi Pillaiyar temple is under the jurisdiction of the Divisional Secretariat and so far the Tamil people have been able to claim it and assert their right to worship, and if they go under the Mahaweli Authority that situation will not exist.